As with all other Bulker.biz properties, hosting is provided illegally by using a hijacked host. Images loaded into web pages, as is common with Bulker.biz hijacked servers, are pulled down from a variety of other hijacked hosts. Each name server used to resolve the domain name to the IP address is also run on yet another hijacked host. These are all Unix servers which have had an exploit loaded on to them to act as a proxy web server or dns server. The owners of these servers are completely unaware that their servers are being used in this way.

Unlike most of the other Bulker.biz properties, Canadian Family Pharmacy has wisely chosen not to claim who their alleged "doctors" or "pharmacists" are. On all other sites these have been fake personas supported by easily-purchased stock photos of models posing as doctors. Also unlike all other Bulker.biz properties, there are no "testimonials" on this particular site either. Another wise choice, since these were also completely fake in the first place.

The picture of the staff on the "About Us" page is fake, and can be found on Getty Images

Like other fraud pharmacies, these fraudsters have printed their own version of a pharmacy license. Not being particularly adept, they have chosen to spell license in the US fashion, ignorant of the Canadian spelling of licence.

They have put a watermark on the document to try to lend it authenticity. However, the watermark is not the logo of the actual Ontario College of Pharmacists depicted below.

On some sites, they display another fake license, this time pretending it is from the Manitoba Pharmaceutical Association. Unlike a real license, it has spelling and grammatical errors, consistent with a fake produced by criminals who lack a good grasp of the English language. They have lifted the MPhA logo from their web site and placed it on the fake license.

The actual real address for the MPhA is

Logo which was stolen, re-colored, and placed on the fake license.

Subsequent to this publishing, these Russian fraudsters have changed the addresses to try to regain credibility, but they have switched to faceless locations, such as business centers or box-drops.

The "contacts" page previously included the following addresses for their alleged "Canadian" offices: 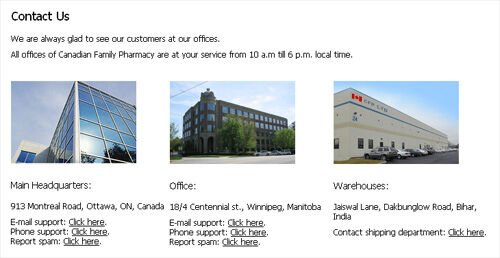 This was a fake address. There is no 913 on Montreal Road in Ottawa. That address has been used for many years as the reported address for Canadian Health&Care Mall, another well-known Bulker.biz spammed property. The nearest address is 919 Montreal Road, which is the location of the Banc Sushi Restaurant. The image of the building can be found at Getty Images

This was also a fake address. This is further corroborated by visiting the actual Better Business Bureau report on this fake pharmacy:

The third was their "warehouse" location, which appears to be a poorly Photoshopped stock photo of a nondescript warehouse building. That address is listed as:

We have not yet confirmed that address, but given the track record of literally every other address they have used (previously in Toronto, Calgary, Louisiana and New Delhi) the probability is extremely low that this address would actually lead to any real "warehouses" for this operation.

Like other Yambo family sites, Canadian Family Pharmacy uses identity theft to register its sites. Victims whose personal information has been used to register one of these sites should follow the steps outlined here.

Like other Yambo sites, this one uses the tirqd Unix infection to hijack servers for hosting the websites, their images, and their nameservers. A given hijacked machine may be serving images to all sites in the Yambo family at one time:

Similarly, the servers used to host the website and nameservers for Yambo sites are swapped around among sites during their frequent changes.

How to Report this Spam[]

Determine the registrar of the domain name and send a compliance request citing their own terms of service.

Determine the IP address of the hosting site and request it be taken down.

Provide a link to this web site as evidence of fraud.

No reputable service provider wants to have their reputation smeared by being exposed as crime sponsors.

Sample sites and registrars sponsoring them[]

Bulker.biz is the sponsor organization behind this type of site. They pay spammers to promote it, and they don't shut down illegal spammers.

Community content is available under CC-BY-SA unless otherwise noted.
Advertisement